Project 5 - Build up an annotation 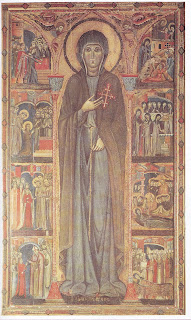 This large panel is mostly taken up by the image of St Clare with eight smaller scenes from her life around her.  St Clare's body is depicted as slender and elongated.  It takes up nearly the entire length of the panel.  She is shown wearing a brown hooded flowing robe with a blue dress.  The folds are depicted in a stylised way but are natural in that they show the shape of her body beneath them.  You can not see her feet but these are suggested by the folds and drapery at the bottom hem of her dress.  She wears a knotted belt and an ornate cross on her left breast.  Her left hand hangs down and appears to be holding the staff of the cross.  Her right arm is raised and her hand lies across her upper body towards the cross.  Her expression is solemn and pious and she looks straight ahead at the viewer.  She has a circular gold halo ringed with black.  St Clare stands between slender columns with vaulted arches.  There is an angel on each side of her halo.  There are four scenes from St Clare’s life on either side of her.  The main colours used are gold, blue and shades of brown and red.
The halo shows that the image is of a saint. The large size and subject matter indicate that the panel was created for a religious building.  The architecture depicted, slender columns and pointed arches, place the image in the Gothic period. The use of expensive blue paint and gold indicate that the panel is of importance and value.  The knots in St Clare’s belt symbolise poverty, chastity and obedience.  This can help the viewer to know that she was a follower of a Franciscan Order.
This image was created only 30 years after St Clare’s death so is fairly contemporary.  It was created to be used as part of a screen dividing the nave from the chancel.  St Clare was a peer and follower of St Francis and founded the Order of Poor Ladies.  She is not as well known as St Francis or depicted as often.  A World History of Art suggests this is probably due to the fact that men were patrons of the arts and unlikely to be interested in a woman’s cult.  At the time that this image was created nearly all visual arts had a religious theme and purpose.  Scenes from St Clare’s life surround her.  A World History of Art relates the stories behind some of these images – they show St Clare’s life from when she made a decision to live in poverty and was given the Bishop’s blessing, her joining the Franciscan community, her miracle of multiplying loaves to support the community, through to her deathbed.  These images would be used to tell followers of her life.