Antoine Watteau (1684 - 1721) French - rococo style Outside the court circle, training as an arts craftsman.  Wide range of subjects including religious, portraits, military and mythological.  Most famous for Fetes Galantes - fanciful pics of well dressed men and women having fun out of doors.  e.g. The Dance.  Prints of his painting appeared all over Europe and he influenced loads of others inc Boucher, Gainsborough, Goya. 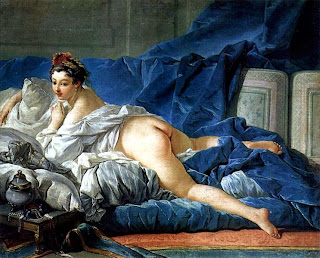 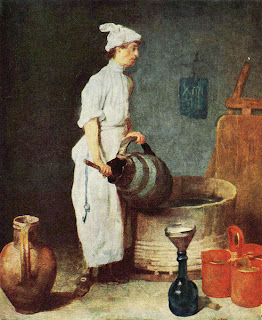 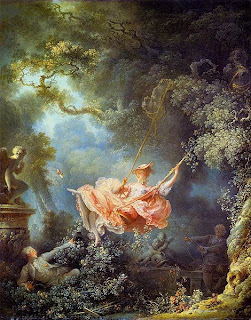 William Hogarth (1697 - 1764) British.  Painted on a theme of secular morality.  E.G. satirical paintings of Marriage of convenience.  Said leads to unhappiness and immorality.

Thomas Gainsborough (1727 - 1788) British.  Started off as landscape painter but not v successful.  Moved on to portraits and became well renowned - became royal artist. Sir Joshua Reynolds (1768) British.  First president of Royal Academy. Obsessed by status.  Wanted to emulate grand Italian style but knew not a market for historical paintings so decided to elevate art of portrait painting.  Posed aristocratic men as Greek statue poses and women dressed and posed as if in mythological paintings.

Angelica Kauffman (1741 - 1807) Born in Switzerland, lived in Italy, settled in Britain in 1766.  Friend of Sir Joshua and one of only 2 female founding members of RA.  Comissioned to paint ceiling of RA lecture hall - Design, Composition, Colour and Genius/Invention. 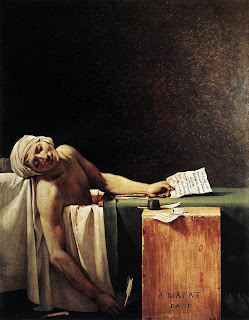 Francisco de Goya (1746 - 1828) Leading painter in Spain in late 18th C.  Employed by the royal court - specialised in religious pics and portraits.  Moved on to some political images - scenes of war (realistic and horrific)
Jean Augustine Dominique Ingres (1780 - 1867) French Pupil of David.  fleshy, erotic, sensual ladies.  Lots of odalisques (female slaves or concubines in a harem) Very precise painting - brightly coloured.  Hockney book shows evidence of his using optical devices in sketches.  Seems to have believed a woman's place is in a harem according to text book - event he clothed ones!  He was a big fan of Raphael - all about the line, big opponent of the colourist Delacroix. 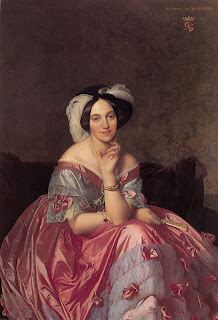 Eugene Delacroix (1798 - 1863) French Opponent of Ingres - more into colour.  Was favoured be the state and got more and more important commissions than Ingres did.  His style had a dynamic energy and rich colour.  He painted perhaps most famous visual image of the revolution in The 28th July:Liberty leading the People.
William Blake (1757 - 1827) English mystic, poet,painter.  Accepted Enlightenment ideas of tolerance, social justice, welcomed revolution.  He believed "the God given faculty of imagination should control the fallible human understanding." (text book p 652)  His writing and art need to be looked at together.
John Constable (1776 - 1837) bought up in East Anglia.  Painter of nature - what he saw around him.  Painted scenes not thought worthy of painting before but made them beautiful.
Joseph Mallard William Turner (1775 - 1851) British landscape artist.  Often misunderstood by contempories, quoted as saying"I did not paint it to be understood".  Natural observer - less reflective, more impulsive.  Started career with accurate watercolour landscapes and accepted as member of academy early in career but then moved on to oil and used methods not used by conservative critics.
Gustave Courbet (1819 - 1877) Rebellious and revolutionary.  Reacted against the frivolous art of the day - A realist.  Thought the everyday was just as important as other subjects.  Painted modern landscapes, modern people, modern things.  Un-idealised women in his nudes.  Rejected academic art.  Big influence on Monet and Impressionists 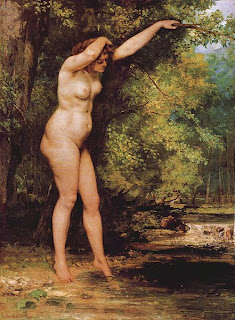 Eourdard Manet (1832 - 1883)  French Realist - often hailed as first modern artist.  Sincere - trying to be himself. Two sides rebellious and conformist, Socialist and respected member of Bourgeois. Influences by and studied masters and Japanese prints and tested their techniques in his work (found some to be incorrect)  Painted from life as much as poss. 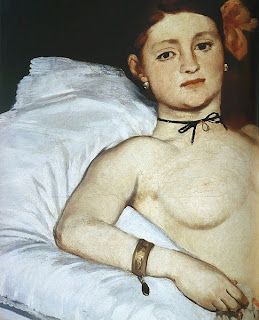 Gaopard Felix Tournachon known as Nadar (1820 - 1910) one of first famous photographers.  Adventurous with what the camera could do.  Began career as caricaturist.  Said technique of using camera can be learned in a day but can't teach how to grasp the personality of the sitter.

Oscar Claude Monet (1840 - 1926) one of most famous French impressionists.  Often painted many view of the same subject in different light conditions and diff times of the day.  E.g. haystacks, cathedrals, water lilies etc.  His pics may look flat but scientific theory of the time says we don't actually see in 3D but that our knowledge of what we are looking at makes it appear 3D
Berthe Morisot (1841 - 1895) French woman artist.  Married Manet's brother. Friend and mutual influence on Manet.  Exhibited regularly with the Impressionists from 1874 but from 1880s began to use more solidity of form and subjects with more personal significance.
Pierre-August Renoir (1841 - 1919) French painter big player in Impressionist movement.  Celebrated beauty and especially female sensuality.  Continued working after developing arthritis in later life - used a moving roll of canvas to paint large pictures with his limited mobility,  needed an assistant to put the brush in his hand and sculpted by cooperating with a young artist who followed instructions to work the clay.
Edgar-Hilaire Degas (1834 - 1917) French artist who exhibited with the impressionists but not a landscape painter and produced work mainly from studio.  Deeply involved in representation of urban life.  Did lots of drawings as well as paintings and also sculpted. (only one sculpture exhibited in lifetime)  famous for sculptures/drawings of ballerinas.

Georges Seurat (1859 - 1891) Invented new technique of chromo-luminarism (AKA divisionism or pointillism). Pointillism - short brush strokes/dots uniformly separated, not directional.  Each a pure colour, not mixed in palette but fuse optically when viewed from correct distance.  Made on the spot sketches then produced large, slow, methodical works in the studio.  His bathers is massive for the time - 6 1/2 foot by 10 foot.  Combination of impressionism, naturalism with academic gravity and formality. 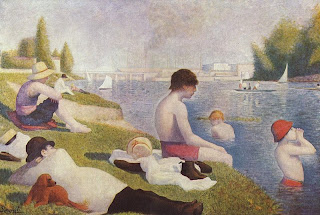 Vincent Willem van Gogh (1853 - 1890) Dutch - didn't start painting til 28 years old.  Painted 800 pictures plus drawings and loads of letters to his brother Theo before committing suicide at age of 37.  In last 70 days of his life he completed 70 paintings!!!  No recognition in life time - the tortured artist.
Edvard Munch (1863- 1944)  Norwegian symbolist studied in Paris.  Paintings and lithographs express states of mind - unbalanced, bordering on pathological.  The Scream comes from theme series of paintings on the sufferings of love - subjective images of emotions of attraction, union, disenchantment, despair.
Auguste Rodin (1840 - 1917) Sculpture who objected to being called a symbolist.  Worked from nature, very realistic.  But is argued that his sculptures are more than copies of naturalistic poses they portray a state of mind and feelings.
Paul Cezanne (1839 - 1906) Independently wealthy - did not need to sell work. Exhibited with Impressionists but went beyond this saying need to reflect upon what is seen and painted too.  Left Paris and worked in isolation and alone in home town.  Did lots of still lifes - some critics say he has got things wrong and they are wonky but others believe this is on purpose to emphasis certain aspects.

Mary Cassatt (1843 - 1926) American woman artist.  Lived most of adult life in France.  Had to study privately as woman not admitted to the school of fine arts.  Exhibited with impressionists.  Subject matter - lots of images of public and private lives of woman.  Emphasis on intimate bonds between mothers and children.