I am not going to try and put everybody I read about in here!  Just some of the more well known/interesting to me....

Pablo Picasso (1881 - 1973)
Spanish - came to Paris from Barcalona at the age of 19 at which point he had already mastered academic arts.  Said to be first modern artist with Demoiselles d'Avignon feted as first modern artwork.  Total departure from Western conventions - influenced by non-Western sculptures and visual arts e.g African, Aboriginal Australian etc.  Created Cubism with Braque.  Created first non traditional sculptures - using materials such as cardboard, found objects, bits of stuff stuck together.  Invented collage method with Braque.  Anarchic and experimental.  His thoughts on abstract art - "There is no such thing as abstract art, you must always start with something." 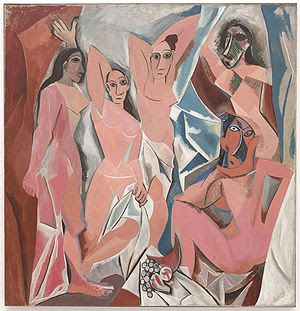 Henri Matisse (1869 - 1954)
Used simplified forms with flat areas of colour - part of the Fauve movement.  Called for art to express emotional responses with spontaneity and vividness.  Worked slowly and methodically making small adjustments until the relationships of colour and shape were what he felt was complete.  Observant and introvert watching his own reactions to what he was doing. 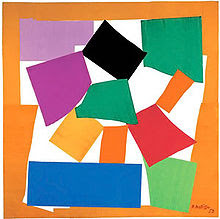 Kathe Kollwitz (1867 - 1945)
German female artist - painter, printmaker and sculptor.  'Might be called a pioneer expressionist but fiercely independent and outside any group'  Considered herself a realist - thought provoking and emphatic images.  One son killed in WW1 other in WW2 - worked on sculptures of grieving parents as a memorial to son killed in WW1 for many years, destroying first that she created. 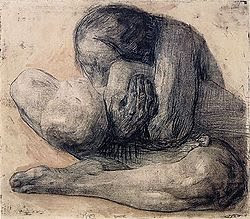 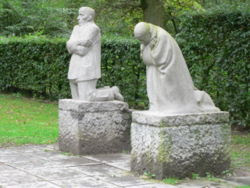 Vassily Kandinsky (1866 - 1944)
Russian - in Munich from 1896 - 1914 plus long stays in Paris and Italy (then off to US).  Highly educated gave up Uni professorship to be an artist.  He experienced music in colour - synaesthesia.  He approached abstraction cautiously and saw the possibilities when he didn't recognise one of his own works when he saw it upside down - felt it had become just colour and shape. 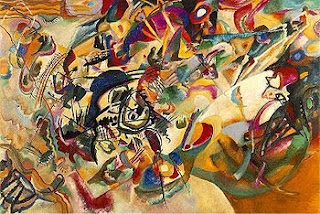 Franz Marc (1880 - 1916)
Killed in WW1 . Starting to approach Kandinsky's levels of abstraction prior to death.  Loved animals and his works dominated by this.  I really like Fighting Forms - his most abstract work.


Marcel Duchamp (1887 - 1968)
Younger brother of sculptor Duchamp Villon.  Ironic, witty, penetrating a born anarchist.  Had a dynamic futuristic vision of Cubism.  A Dadaist - his ready mades totally rejected accepted artistic rules.  Took objects and made into art just by the act of him having chosen them e.g urinal, bike wheel on a stand.

Edward Hopper (1882 - 1967) American painter - not associated with any movement.  Precisionist - close observation of his local down town neighbourhood.  Paintings of America post Depression. 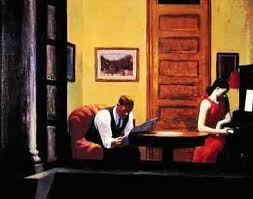 Frida Kahlo (1907 - 1954)
Mexican.  She was welcomed into the Surrelaist movement by Breton when he saw her work but she remained defiently outside it.  Surrealism was still very sexist at the time - e.g. Breton wrote about the problem of women and got the Surrealists together to discuss female sexuality but without inviting any females.  She painted her own reality - loads of self portraits exploring her body, sexuality and cultural identity.  She lived in chronic ill health due to an accident when she was young. 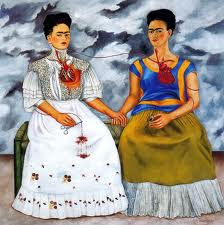 Salvador Dali (1904 - 1989)
Spanish - most well known of Surrealists.  Tried to capture the hallucinatory clarity of his dreams called them 'hand painted dream photographs'  Went beyond ideas of most Surrealists - suggesting paranoiac and active advance of the mind - said only difference between himself and a madman was he wasn't mad!  Freudian symbolism very evident in his work e.g. phallic noses, fetishistic hair. 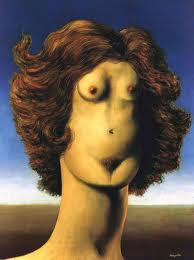 Joan Miro (1893 - 1983)
Spanish.  Breton considered him to be 'the most surrealist of us all'  Developed ability to let his subconscious create semi abstract forms.  Started painting then let instinct take over to create image. 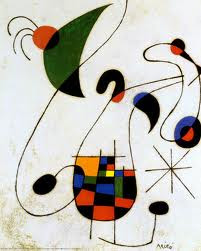