Unit 2 - DVD - The Classical Tradition. Chapter 4 - The Legacy of Greece

I watched my first DVD and read my first (massive) chapter of the text book this week.

I have made quite extensive notes and don't intend to put them all on here as well.  So I'm not even going to go back through my text book but just pop down the some of the stuff I remember most....

Idealisation to naturalisation and realism - basis of Western art

Foreshortening - realistic rather than stylised

See image for evolution of realism.

Doric - Simplest style - plain fatter columns, unadorned capital, no base, embelishments tend to be in addition to the structure.  Used as outer of building.  Placed according to rule of eye, illusion of symmetry rather than actual
Ionic - thinner columns, base and carved capital.  Embelishments used within structure, carving and statures throughout.  Buildings designed to be viewed from front
Corinthian - Much more adornment to capital, flat roofy bits.  Used inside buildings rather than as outer structure 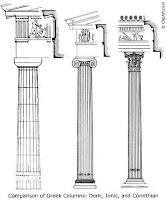 Questions to ask
Posted by rachalulabelle at 14:53