For project 3 I needed to make studies of several free standing Roman figure sculptures (including copies of classical Greek statues).  I've not done any life drawing so have no experience of drawing figures to compare this to.  I didn't have easy access to any actual Roman sculptures so used images from the course book to copy.  I chose the statues to copy as they were interesting to me or stood out in some way.


The first sculptures I chose to copy were Doryphorous and Augustus.  I chose these as am interested in the idea of using classical Greek idealistic bodies with portrait heads.  Augustus has the body of Doryphorous but not only has a portrait head but also Roman clothes added and changes made to the position of the arm. 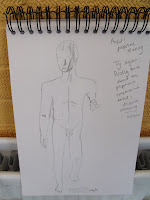 I started with a sketch of Doryphorous and it didn't go very well as you can see! The top half is much much bigger than the bottom - I should have not worried about the end of the paper.  I decided to look at the figure a lot more closely and actually took a ruler to it to measure the head and other key points.  For the next sketch I drew myself some rough guide marks before starting and this helped get the proportions right.  Sketching this made me think about how skillful the artists who created these statues were - very strange to think that the Roman artists making copies were thought of as simple manual workers as they were clearly extremely talented. 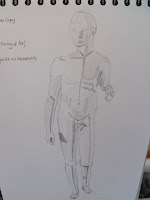 My second attempt at Doryphorous - much happier with the proportions on this in relation to the image of it.  Looks a little top heavy - not sure if this is due to my not v good drawing skills or the idealised form with a developed chest and upper body taking prominence. 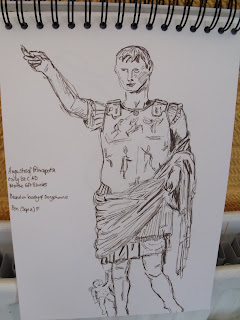 This next sketch shows Augustus from the early 1st C AD.The sculpture is modeled on the previous sketch of Doryphorous but with some changes.  Augustus is shown with his right hand raised and pointing (in a speaking pose - A World of History of Art).  This gives the figure a more authoritative look and is used to show that Augustus is a leader of men.  The carving on the draped cloth is stylised rather than naturalistic - it seems to be both elegant and dramatic with the drapery over the left hand and falling down at the side which aids the balance of the piece.  The carving on the body armour is thought to show symbolic scenes from the story of the Roman victory over the Parthians (A World History of Art -p 196) The whole image is very different to the previous one on which it is based - this seems to obviously be a powerful leader.  I'm not sure if he looks powerful because of the pose or because he looks like Roman Emporer statues I have seen prviously. I am not sure on the significance of the addition of the small cherub - it could have been used as a method for hiding the support but am sure there is a better reason than this. 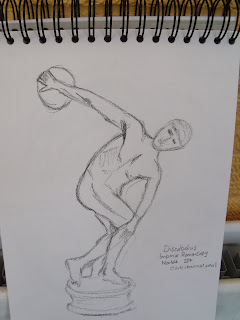 My next choice was Discobolus - chosen as I think it is an easily recognisable piece and I like the fact that the posture is different from a lot of other pieces (mostly upright poses).  I chose to use charcoal for this and to work quickly.  This helped me see how the shapes are connected e.g one long curve down from the top of the arm holding the discus to the bottom of the other arm.  Having just had a go at copying this pose I don't think it is very natural!  It is unlikely that an actual discus thrower would be in this position - the pose has been chosen to show off the grace and athleticism of the body. 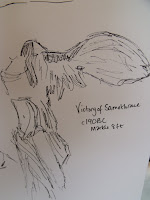 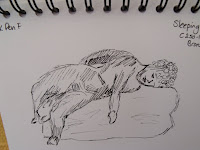 The final images were chosen more because I wanted to have a go at drawing them and as they stood out to me as I was looking through the images.  They include a sleeping Eros, a portrait bust and Samothrace.  They helped me to think more about the skills of the sculptures and the variance of subject matter shown in Roman art. 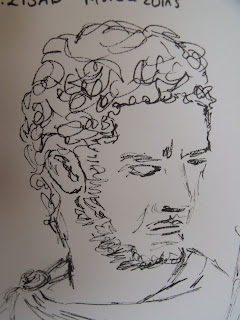