Understanding Western Art 1 – Project 4
Visit to (13/04/2010)
For project 4 I needed to visit a Gothic church or cathedral to look at features I have been learning about in Unit 4.  My husband, who has an interest in church architecture, suggested as it is a highly regarded example of a High-Gothic (Perpendicular) church. 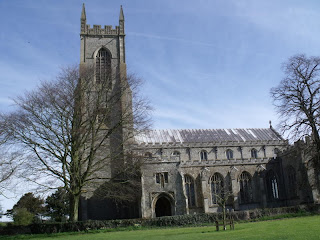 Structure, Engineering, Decoration
Building on the current church was started in 1400 and mostly complete by 1430.  This short building period led to their being no changes in the design as was often the case on longer projects.  Their have also been no later additions and it is almost entirely in its original Perpendicular style.  Although renovated in the 19th century, a local land-owner and medieval enthusiast ensured that this was carried out sympathetically retaining as much of the original as possible rather that altering the features to become Victorian Gothic as was the case in many other local churches.  (Online – www.reephambenefice.org.uk/sallehistory.html)
On arriving at the church I walked around the exterior.  The church follows the crucifix shape and lies with its main door to the West with transepts at North and South.  Unusually it has two additional porches extending to nearly the same distance as the transepts which were built to house the additional chapels required by those funding the building. 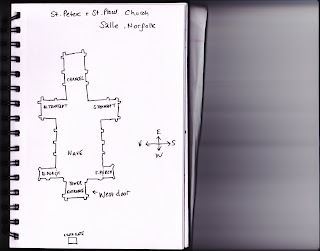 The church does not have any visible flying buttresses (but these are more likely to be found on larger churches/cathedrals.)  However, Brown (1998, page 196) describes how, “In the clerestory roof the wall posts are tenoned into the ends of the aisle beams, which protrude through the wall and so ensure that the outward thrust is carried to buttresses on the outside of the aisle wall, thus acting rather like flying buttresses.”

From the outside you can take in the large pointed arch windows with rib tracery.  The majority of glass is clear with only some of the original stained glass remaining.  Each of the individual chapel doors is decorated with carving around.  The main entrance of the West door is ornately decorated with coats of arms above, angels on either side in the spandrels and niches which would have originally have held statues.
On entering the church my first impression was of light and space – completely in keeping with the Gothic ideals.  The large windows along the aisles and at the East and West ends flood the church with daylight.    Jenkins (1999 page 469) describers an interior of “immense height and volume.” 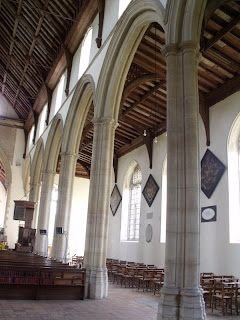 Just inside the main door you come to the traditionally East Anglian Medieval carved font of the seven sacraments.  has twenty-two of less than forty of these in the whole country! (Online www.noroflkchurches.co.uk)  The eye is then drawn along the six arches on either side of the aisle.  The columns are tall and slender but on closer inspection are thicker than they seem as thicker columns have cleverly been carved to look like four individual thinner columns.  The capitals are plain and undecorated.
Looking up I noticed that the roof of the nave is not vaulted as I would expect after reading about Gothic architecture.  Instead it is of ‘plain arch brace’  (Jenkins 1999 page 471)  On closer inspection I can see traces of the medieval carvings and decoration.  The church leaflet states that it is possible to see the colour of the 15th century paint if you use binoculars.  Between the braces are carved angels and flowers.

Moving down the church towards the transepts and chancel you pass the medieval wineglass shaped pulpit.  The colours have faded but it is possible to imagine how bright it would have looked in the past. 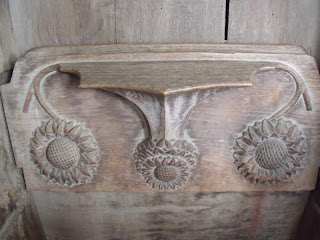 The transept roofs are ornately decorated and it is alleged that they were the inspiration for the roof in the House of Lords.  (Jenkins 1999)
The chancery is dominated by the vast East window.  A small amount of stained glass remains and it must have been breathtaking in its fully coloured state.  The roof is also richly decorated and the choir has its original stalls and misericords.  I was very interested to look at the carvings of the seat backs and arm rests as I find the range of subject matter and delicacy of the work really appealing.  If the church hadn’t been so cold I would have stopped to look at them for a lot longer!
Size, Planning, Use as a Place of Worship
When arriving at Salle church it seems to be in the middle of nowhere!  There are a few houses along the road to it but it is surrounded by fields.  Yet the church is large, bigger in size even than some small town churches.  As Jenkins (1999 page 469) states it is, “..far beyond the means or needs of its community.”   Its history and the people who funded it explain why it is so large.  The area had several wealthy families (lords of the manor) who had made their money from wool.  These families of ‘new-money’ wanted to build a large church as a symbol of their success, to compete with the old-money families who had built a church in the nearby and most importantly to provide chapels for the Gilds.  The Gilds acted as trade union, employment agency, standard board and gave divine protection – they were very much necessary in order to prosper in business.  (Online – www.reephambenefice.org.uk/sallehistory.html)
The need for chapels for the Gilds was met by the additional porches as each housed a small chapel.  There is also a small chapel on a floor above the porch at the West end.  In the 15th century the lords of the manor employed 12 clerks to work in the chapels.  At this time the church must have been very busy.  The employees would have attended services and have been reminded of the wealth of their employers.

The families decided to use expensive stone brought from rather that the cheaper local flint.  I would imagine this was done to show how prosperous they were.
The church is still in use today even in such a small parish.  It has regular Sunday services and special celebrations during religious festivals.  My visit was just after Easter and there were additional chairs set out in the aisles, leading me to think that they must have a large congregation to need the extra seating.


Commemoration
The families who paid for the church to be built have their coats of arms above the West door.  This would remind all who entered of their prosperity and spirituality.  It also commemorates the families involved.  One of the families were the Boleyns (it is rumoured that Anne Boleyn is actually buried in the church).  One of the other families, the Morleys, are still local land owners and farmers today.


Other forms of contemporary commemoration also mark the lives of those who paid for the building.  Jenkins (1999) describes how an ‘E’ is worked into the tower parapet in memory of Evarard Brigg who funded the tower.  The church’s own guide mentions how the transepts commemorate their donors with their initials.
Throughout the church are other commemorative features including floor and wall brasses.  These date from the time of building to the present.