I decided to try reading the book first and then watching the videos afterwards.  I think I got more out of the DVDs this way but found the chapter very confusing - it didn't seem to follow any kind of sensible pattern e.g. chronological or different types of art.  (I'm sure it did really but I do find these massive chapters quite daunting)  I think I need to read through without taking any notes and then take some on second reading but as it takes so long to read in the first place not sure I want to!

Monastries had empires - land and buildings paid for by rulers.

Romanesque style - (originally meant in a derogatory way comparing to Roman style it is based on.) Used model of basilicas for church buildings but evolved.  Used the big columns, domes and vaults but moved on to stone roofs and changed shape to a cross wiht the transepts and had mini chapels coming out of the apse.  We call it Norman!

No architects - the master stone mason, hence all the carving maybe!

Visual arts - pretty much mostly religious.  Need to get message across to the illiterate poor so use easy to understand images to tell about past (stories and visions), present (virtues and vices) and future (punishment and reward) (Page 409)

Lorensetti (mid 1300s) one of first momentual (big and important!) secular paintings in Western Art (since antiquity) (page 409 too)

I need to add a plan of church so I can practice naming all the bits but will do this another day.  Will include - Nave, transepts, choir, apse, ambulatory, aisles and anything else that I'm missing! 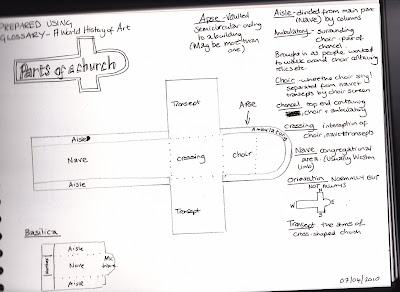