Analysis of 16C Painting with a Mythical Subject
Bacchus and Ariadne – Titian, 1520-23, oil on canvas, 172.2cm x 188.3cm, National Gallery -
Unfortunately I haven’t been able to view a suitable painting so chose one of the suggestions for annotation and have had to complete this analysis looking at reproductions of the original.
On first looking at the picture the first thing I notice is the brightness of the colour and that there is a lot going on.  My eye was first drawn to the figure of Bacchus just off centre – his pink cloak flying behind him showing that he is in motion.  His attention is focused on Ariadne to the left.  Ariadne is facing away from the viewer looking out towards the sea.  Her head is turned towards Bacchus with an expression of shock, her hand is pointing towards the sea.  She is separated from the other figures and only linked through her looking at Bacchus.  The way the picture has been composed leads the eye in and around.
Aerial perspective has been used effectively to show the landscape is in the distance by the technique of using dull, muted blues.  Perspective has also been used in the group of followers as those towards the back are smaller than those in the foreground.
The picture can be split into 2 halves diagonally from corner to corner.  The top half is bright and predominantly blue. The figures of Bacchus and Ariadne are painted more vividly than the others making them the dominant figures. Also pictured are 2 cheetahs looking calmly out to sea.
The lower half is painted in duller shades and contains a group of mythical men and women. 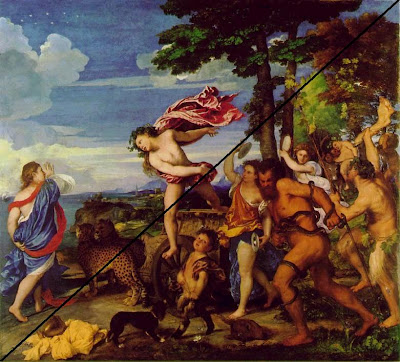 The figures at the front of the pictures are dancing, making music and behaving crazily.  A baby satyr (similar to a fawn) is the only character who looks out of the picture and seems to lead the group which consists of grown satyrs, maenads and an overweight man who appears to be asleep on a donkey.  One of the satyrs is twined with snakes and the other is waving an animal’s leg in the air.  The head of an animal (cow or donkey – I can’t be sure which) lies on the floor.  A dog, wearing a collar faces the baby satyr.  On the floor at the left of the picture is a large cloth with a gold cup sitting on it.
This shows the way the group of followers seem to curve round the right of the painting. 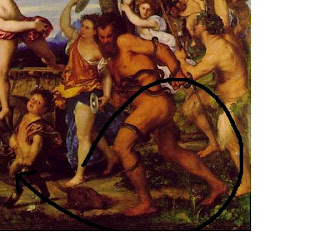 The picture was created as part of a series for the Duke of Ferrara.  It depicts the classical story told by Ovid and Catullus.  Titian has included lots of details from the story and has used symbolic imagery to convey the tale.
Ariadne the daughter of the King of Crete had run off with Theseus who has just abandoned her.  This is shown by the ship at sea and her facing towards the sea looking out after him.  Bacchus arrives on his cheetah drawn chariot with his followers.  He falls in love with her immediately, but she is at first startled by his arrival as shown in her facial expression and body language.  The couple then marry and when Ariadne dies Bacchus commemorates her eternally by sending her crown into the sky to form a constellation of stars -hence the stars in the top right shown against a daylight sky.
The story talks about the Bacchantes (followers of Bacchus), “Some brandished ivy spears with leafy points. / Some tossed pieces of a ripped apart bullock. / Some wreathed themselves with coiled snakes.” and also, “Others were striking drums, their palms raised high / or were stirring shrill chimes with polished brass cymbals./”  (Catullus, The Wedding of Peleus and Thetis – trans T Banks in De Rynck 2004) All of these images are easy to find within the composition and convey the idea of madness they are meant to.  The overweight man on the donkey is Silenus, Bacchus’ foster father and is thought to be sleeping off his hangover.
Images that Titian has added may be related to the Duke and included to personalise the painting for him.  Titian often included dogs in his pictures and it is thought that this dog could be a pet of the Duke’s court.  Titian has signed the painting on the golden cup and it is possible this is a representation of one of the Duke’s belonging.
Looking at Titian’s interpretation of the story in comparison with two other 17 C examples demonstrates how masterful he has been in his use of colour and skilful representation of the characters and story.

This picture by Ferdinand Bol was painted over a century later. Although he
has used beautifully bright colours for Bacchus’ clothing, the characters look stilted and far more posed that Titian’s.  You have no sense of the wildness of Bacchus’ character as Bol’s Bacchus looks incredibly staid and gentlemanly!  Titian’s use of other figures enlivens his version making it far more interesting for the viewer.

L’Orbetto’s depiction of the myth includes some of the characters from the story as used in Titian’s painting.  You can recognise Silenus the drunkard and one of Bacchus’ Maenads is placing the coronet upon Ariadne’s head.  In contrast with Titian this painting seems dull and staged.  Titian manages to compose his picture to make his characters seem alive and as if we have just happened upon the scene.
Looking at this painting in more depth has made me aware of how great a painter Titian was.  Looking at the symbolism used and how the painting links to the story has helped me reflect on the work that artists put into their paintings before they even start.  Comparing his colour and composition to other artists has enabled me to think more about the differences between painters and start to make my own personal judgements about what I feel makes a good painting.