When planning my first visit of the course I wanted to try to stay as local as possible.  This was due to time constraints and also the feeling that we very often overlook the amazing architecture that we see everyday around us.  Having viewed the DVD and read a little about Classical Greek architecture I have been overwhelmed by how much of these influences are reflected in the buildings around me.  I decided on Surrey House for my visit as when I started to research possiblities I kept coming across information on this building and was intrigued.  I had walked past it before but never looked closely and wasn't even aware of the elaborate interior.

Building work on Surrey House commenced in 1900 and continued through to 1912.  The building is still being used for its orignial purpose today as headquarters of the Norwich Union insurance company (now Aviva).  Local architect George Skipper was comissioned to design the building and he created a functional office space with various Greek and masonic symbols.  These were due to the influence of a descendant of the Union's original founder who was a classically educated prominent Mason.  The design uses themes of insurance, protection and wellbeing to show customers the strength and prosperiety of the company.  (Surrey House - the magnificent heart of Aviva - in house publication)

I'd done some research on the origins of the building online, then on Friday (26th March), I had an unexpected free afternoon so off I went with camera and sketchbook. 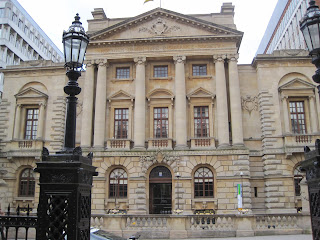 I started by examining the exterior.  The building is certainly grand.  Six symetrically placed corinthiun columns are placed above ground level on the front of the main frontage to the bulding.  The frieze above the columns reads "NORWICH UNION LIFE INSURANCE SOCIETY" (Let's hope Aviva don't decide to change this part of the building!)  Above the frieze is a Greek temple style pediment with cornices and dentil.  The windows are placed to give the building an overall feeling of balance and have columns around the 1st floor and roman styled arches on the ground floor.  Everything about the building is balanced.  Note the insignia on either side of the main columns and the balustrades which appear again along the side walls and at the front to the courtyard. 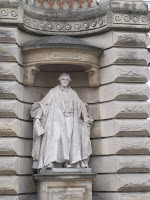 Very much part of the building but at street level are two life size statues depicting prominent figures in Norwich Union's history. These would be used to remind customers of the importance of the society and it's founders. The patterned border above the statues appears classically Greek and is repeated on the main building. 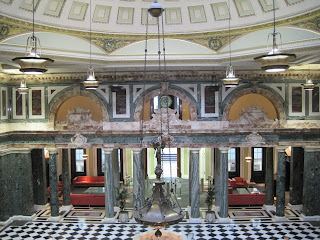 On going into the building you go through an entrance hall before walking into the overwhelming opulance of the main hall.  These are decorated to complement each other and the transition from one to the other is hardly noticable.  Now housing a large reception desk and a few sofas, this hall was orignally used as the main place of business, full of desks for the society's tellers and where customers would come to pay their premiums.  What could fill you full of confidence in your insurance company more than a room completely made from marble?  The guide book tells me that there are 15 different types of marble used in the building.  Skipper convinced the society to purchase this at a bargain price as it had been brought to England to be used in Westminster Abbey but arrived too late.  It is difficult to take everything in and I spent a long time sketching and taking photos.  Everywhere you look is decorated, the patterns on the floor, walls and ceiling are geometrical with sculptures and reliefs of fruit and flowers, alongside coats of arms of London, Dublin, Glasgow and Norwich - to emphasise the importance of the city of Norwich in the British Isles.  The symbols of the Life Society's orignal coat of arms are also present - "a winged hourglass representing the swift flight of time" - this would remind people to purchase life insurance to provide after their deaths.  "The serpent and dove for wisdom and purity" customers are subtly being shown that the society is dependable, trustable and wise.  "...and the clasped hands for friendliness" - above all your insurance seller is your friend! (Surrey House - the magnificent heart of Aviva - in house publication)  The ceiling is domed in a Roman style and hanging down is the amazing air conditioning/heating system designed by Skipper.  He was adamant that there should not be radiators to mess up the lines of his building (an advantage of building in this style at a later date he could forsee this!)  A pendant hangs over a "fountain" and the design means that cool air is wafted through the hall (total change of fresh air every 20 minutes!) in the summer and with heat coming up from underneath in the colder months an opposite effect of warm air being placed in the hall.  I asked a member of staff if this is still working and it is to this day and they say that it really does keep cool in summer and warm in winter.
I was fortunate on my visit to have a security man ask if I would like to take a look upstairs, not usually open to visitors.  This meant I got to go up the marble staircase and look down on the main hall - an incredible view.  On the way up the stairs hang a series of portraits of directors through the ages.
I also was able to view the Board Room.  "A diversity of rich colours, styles and textures" The ceiling is painted with scenes from Greek Mythology alongside yet more reminders of the passing of time and the influence of fate (buy that insurance now!) 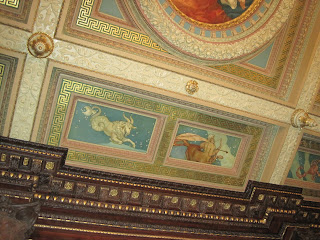 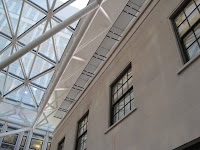 I was then taken to scramble through a window on to a roof terrace and the security man talked me through the additions to the building as the company has grown.  A new wing has been added in each of the decades from the 60s to the 80s.  This left a patch of garden at the back which had become derelict.  The atrium was opened in 2006 - this joins the 4 different builidings and provides a large and light space for employees to eat and hlod informal meetings. 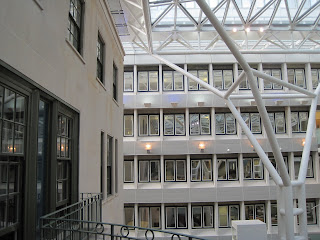 Overall feelings on the design of the building
I think that Surrey House is undeniable an amazing building and will be urging friends and family to visit and see for themselves.  However, personally although there are elements that I really like overall I find it too much.  I find the front agreeable and an impressive and beautiful building.  Internally I think there is too much of a mix match of styles and that it is a bit over the top.  I think for it have been built as an office and still to be in use as such today is wonderful and that it must have been very exciting for the Edwardian residents of Norwich to have such a new building as their insurance headquarters.  I hope that it stays with Aviva for many years to come as an important piece of architectural and economical history.
Links to websites with information on Surrey House
http://www.norwich12.co.uk/surrey-house/
http://www.pocketnorwich.co.uk/pnhfiles/surreyhouse.html
http://www.wayneellison.co.uk/print/surreyhouse.pdf
Posted by rachalulabelle at 08:58